A fast nickel beats a slow dime any day.

That’s what any (true) hustler that hustles (by working hard as a workhorse and puts out like a unicorn) will tell you.

Such is (the realization) of Elon Musk’s Tesla who, thanks to OSFMag’s girl’s writeup last week?  LoL)…yielded quite the poppin’ week for the transportation tekkie.

Be that as it may or may not be, Musk got a nudge. A nudge of a ‘hustler’s’ cardinal rule-necessary to know in order to keep the momentum and speed.

In the land of it ultimately being better for both sides, it’ll all catch up to itself.

Get the momentum, worry about the money, later. The change gon’ come-especially when you’ve got the demand for the supply.

With this week’s success of: 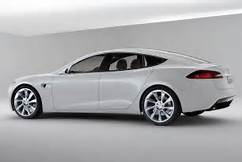 …the long-elusive, mysterious tech titan has come down to earth. Once upon a time, it seemed as though his entity and person was an anomaly of virtual reality over reality itself.

Last week, via Tweet, we learned (be it clinical or creative) the SpaceX cyborg has felt the same us terrestrial. A victim of a bullied past had once become him. Angst and depressive moments still become him. Through this revelation, despite his genius and high end technology, he’s still in touch with the many.

We love to toss “I know my worth” around like a weapon or a warning signal, but when you REALLY work hard and set the bar high because what you bring out the gate sets itself a part from all that is beyond it; you can, by creative right, set the bar high.

That’s precisely what he did with his Tesla Model X – the well-kept secret of the rich and one like Miss Glamorus Life said best: “If you have to ask you can’t afford…”

Not only could many not afford the price range, unless you are a tech-geek, many knew nothing a about Elon Musk until recently.

Whether it be by circulation of social media or the power of media, many were introduced to him by way of it. Tesla enthusiasts recently became Tesla customers when he finally built a Tesla model that didn’t seem so untouchable.

Well Tesla enthusiasts who came closer to the dream and got their chance to get on the ($35k) list are closer to their (ultimate?) dream: a decrease on the $82,500 entry level price of the Model X SUV, reports Reuters (via Tech Crunch).

Out of fear that it would hurt the higher priced models, reportedly, the manufacturing of an affordable Tesla model was met with the speed of trepidation.

The fear was that manufacturing a modest-priced Tesla would make the high-end “Tesla” brand it built itself up to be-just like all the regular’ other automotive technology on the market.

Well it turns out [that] the company’s demand for the (dare I say) “cheaper” $35k Tesla Model S served a benefit. It inadvertently increased the demand for the higher priced Model X and V’s (anyway)…

Proof positive that a fast nickel beats a slow dime any day, and in many ways.

Apply that to any area of your life and you just may get more of it, or something else-anyway.