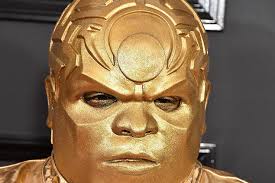 Looking like The Wiz’s (Tin Man) Nipsey Russell and as if he would sure be belting out the song “Slide Some Oil To Me,” unlike eclectic, producer-rapper-singer CeeLo who just last week, went for the gold from head, (skin) to toe and met with curious stares and Internet memes; last night’s red carpet held up leggy GMA host, Robin Roberts in the best way. Robin rocked thee most gorgeous painted-on gold number that matched her hair and perfectly oiled skin so that Oscar looked worthy of her as she interviewed the stars dressed in Sunday after 5 best.

My GOD she was gorgeous! Who knew-sitting behind that anchors desk-she had all that backyard?

…but with non other than Justin Timberlake stepping through to his hit ‘Can’t Stop The Feeling.”

Last night’s Academy Awards gave all the feels, thrills, (and feels of the hurt kind) when, first, the winningest movie at the box office this year so far lost every award category: Hidden Figures-it was as if the golden hidden figure was meticulously kept from landing in the hands of the actors nominated for the movie, thus stirring up last year’s hashtag plaguing the ceremony: #OscarsSoWhite  (…despite Kevin O’Connell being nominated 21 times and finally snagging the gold for Mel Gibson’s Hacksaw Ridge).

Although Affleck stood upon the stage to collect his statue and ingratiate himself to Washington, the sentiment went ignored and all of social media saw (and felt it).

The night went well for Denzel’s co-star however, Viola Davis when she won Best Supporting Actress for the movie she did with Washington. Reportedly, she is the first black actress to have taken home the award for that particular category.

So like actress Halle Berry who looked stunning (last night) and curly hair got its own Twitter account (last night), Viola’s felt-provoking speech shall too go down in “first black actresss to win the award for” history right along with Halle’s 2002 Academy Award archive

Somewhere in this thing, Viola and me were kindred in spirit where when writing up Jimmy Kimmel’s post (pre show), I too, wrote and felt what she felt: actors give/bring movies’ stories to life.

The highlight of the night was run into overtime-four hours past the 11th hour into the ceremony.

If you stayed up, then you were there to wintess a  mysterious switch that further proved that OCD afflicted “Mommie Dearest’s” Faye Dunaway is indeed one damn, good actress

..because if not, she certainly would have had a ‘no wired hangers’-ish episode last night right next to Warren Beatty, ‘cause shit was all OUT of order, indeed.

The unexpected last moment sent shockwaves around television and social media as, if was yet, another off-guard moment reminiscent of last week’s Grammy’s where Adele won the last, top award (for Album of the Year) that many assumed Beyonce had in the bag but when it was Adele who bagged it, she turned the honor to Beyonce with genuine praise in feeling the award should have gone to her, instead.

The irony of this moment was not only the fact that the award started out as going to LaLa Land but ended up actually belonging to “Moonlight,” but when the card was held up as proof that the award was indeed “Moonlight’s and not LaLa Land’s, the first name on the card read Adele [Romanski].

(I thought that was ironically funny).

Needless to say, all statues are home and shelved and many are reeling at our great, beloved, hardworking actor Denzel Washington, like Kevin O’Connell, is starting to look like the Academy Awards Susan Lucci: Well known. Well deserved. And well documented as being dissed-every year for some odd reason.

1 thought on “About Last Night: Slights, Snubs, Shenanigans and Wins Of the 89th Annual Academy Awards !”