Actor Ashton Kutcher is out here moving from “Punk’d” to ‘purpose’ in life-leading the fight against child sex trafficking.

Meanwhile, some some other “punk” is out here feeling it’s okay for “young men” to date older men and such.

On Capital Hill, “young man” (Ashton) and older guy (John McCain) managed to keep their flirting in the court room at the bench.

But elsewhere in the world however, Milo Yiannopoulos is looking real ‘skep’ in the court of public opinion for statements he made on on age consent laws [believed to be] leaning towards pedophilia.

Say this run-on with me *Scandal fast: 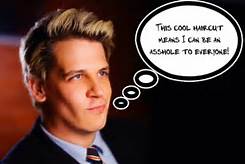 Rebel rousing republican and left wing, Trump-loving, gay,  Breitbart writer known for celebrating his acceptance of [all the typically antithetical aforementioned] who too, gained ground for being a professional troll, may have been considered “marketable” for his bad behavior and in turn-landed a book deal from “You’re So Vain (I Bet You Think This Song Is About You)’s” Carly Simon’s dad’s company “Simon and Schuster,” just got shelved by the book publishing giant and handed a pink slip that most probably read: “You’re So Vain (I Bet You Thought This Book Deal’s About You. Don’t You…Don’t You…)?”

Related: You probably don’t want to be on a bestseller list if you are an entrepreneur

Until the gods blessed the publishing industry and writers with options you no longer have to chase (thanks to on-demand publishing and the Internet leveling the playing field) as a seasoned writer for over 10 years whose full-time job (in addition to writing novels) used to include searching for agents to land me that one great, book deal; one thing I studied long ago about the dream [and the rights to your book no longer yours as a trade off for agent representation and “New York Times” bestseller bragging rights] is that part of securing that “great book deal” comes with a ready-made, publishing company-designed speaking tour. Part of Milos Yiannopoulos’ probably is that…he’s said enough on Twitter already that’s got him booted from the social media giant. Nobody wants to hear him speak because his reputation rhetoric precedes him.

Most recently, his invite was met with raging revolt at U.C. Berkeley. That duty and dream was doused and done with leaving the controversial professional troll to hang out on the radio and
television circuit list of the few shows that would have him. As mentioned over at our sister site: ToriSpilling.com, while Milos was going head to head with Larry Wilmore on Bill Maher, trouble was finding its way to the public: Video footage of Milos defending relationships between young boys and older men.

Whether I’m putting something down or praising it, I like to evaluate it. Many people are questioning the context of Milos’ disagreement with “age consent laws” and whether or not the public is just running away his questioning age consent laws being a translation for feeling pedophilia is ‘okay’ in his book (pun intended).

Sorta like (how I explain here) how I disagree with ‘18’ being “legal age” and “adult,” –that’s still a child, to me. [I feel that] eighteen is just an age where society and its bureaucratic systems (that have nursed us out of preschool through high school) expects that we will either be going to work to contribute to the business of the country/society or you that we will be off to getting our ‘social security’ and racking up a major bills to pay society back for granting us our certificate of ‘social security’ (degree). Just like I feel the age of consent for an adult being 18 is wayyyyyyyyyyy too premature, obviously, if Milos felt the ‘age of consent’ should be under ’18’ -in other words, the pendulum does swing with him being pro-pedophilia and one can only be left with nothing but to assume he is pro-pedophilia.

While Milos has been getting rewarded for his blatantly offensive behavior (and obviously thought he was on his way to being the male version of Lena Dunham who too, has said some vile things as revolting as incest and beyond), he just got shown that there are lines and levels to that sh\t.

Milos Yiannopoulos is a cautionary tale and lesson that while the bad behavior (of purposely and intentionally hurting people and trolling online) + being a gay guy accepted by left wing media may have been “interesting” enough to secure him a book deal, it wasn’t enough to gamble on him, Simon says. All bets were off when he tried to pull a Dunham and now he wears an official duntz.

@rgay Thank you Roxane ! for an erudite and honest deconstruction of why Simon and Schuster pulled out from Breitbart's Milo $250K advance. pic.twitter.com/P495sJGcQn

Tune in to ToriSpilling to read more on that story and, the latest on Lisa Marie Presley who’s been in the press lately after it was found that her husband was found to have had some disturbing media in his possession involving kids. This discovery lead to her kids being removed from the home. Elvis Presley’s wife and Lisa mother, Priscilla Presley stepped in and took the children in until all this is resolved. Meanwhile, since then, it’s being reported that the Elvis Pressley heir’s $100k per month fortune is dwindled down to nearly nothing anymore. Tune in to ToriSpilling for the latest on that as well.

Ride sharing giant-Uber has been running into some serious T-bones and taking many U-turns on its once upward climb of the ‘can’t do no wrong’ of technological inventions that changed the game of traditional cabbies.

Well in the words of “Pleasure Principle”: “Oh my meters running so I’ve got to go now,” it’s come out that Uber’s guilty pleasure has been in the of sexual harassment going on at its headquarters with culprits merely getting high low fives and slaps on the wrist.

The principle of pleasure: While the victims of the reported sexual harassment (starting with former engineer Susan Fowler)’s complaints have fallen on deaf ears, this time, its (35-year old) CEO is taking the claims serious—now that its ‘out there’ is such a grand way in these social media and Internet streets are no? Either way, these women are finally getting their just deserts without being deserted with their cries riding off into the sunset.

Tap in to ToriSpilling.com to get the deets on that story here!